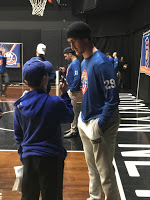 Carter LaCorte (me): In a season where there have been some tough times for you, you now are on a much needed hot streak (he was at the time). Why do you think you\’ve been playing much better lately?

Brock Nelson: I think our line has been pretty good with [Andrew] Ladd and [Tanner] Fritz. We just try to play fast and score some goals.

CL: The team has been very good on offense, but has struggled on defense. How can the forwards help prevent more goals from scoring?

BN: That\’s a big focus for us. It starts with everybody going back and play hard in the D-zone. We need to give our goaltender some help. If we can do that, it\’ll lead to more offense.

CL: What is it like being back at Anders\’ second kan jam?

CL: If the NHL expanded to Seattle, and you could name the team, what would you name it?

BN: I\’d have to go to the drawing board to get a couple of ideas.

CL: Who has the biggest personality on the team?