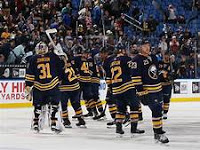 Finishing in last place in today\’s NHL could sometimes fail, and you could get the 4th overall pick with the lottery system. But, the Buffalo Sabres lucked out, and got the first overall pick, adding top NHL prospect Rasmus Dahlin. But, the team still has a lot of work cut out for them. Before we go into detail, let\’s look at some fast facts for the Buffalo Sabres.

Forwards: The team that scored the least amount of goals in the league in 2018 has lost second line center Ryan O\’Reilly, but added firepower on the left side with Jeff Skinner and Conor Sheary. There are Believing in rookie Casey Middelstadt to be their second line center. When winger Kyle Okposo is healthy, he\’s a great top 6 winger. The problem is, he hasn\’t been that since joining the Sabres. Patrik Berglund and Vladimir Sobotka are two veterans from the O\’Reilly trade that are expected to be key third liners. The big part of the trade, Tage Thompson, will fight for a 4th line spot.

Defenseman: The first overall pick, Rasmus Dahlin will be a force both offensively and defensively. Pair him with the other Rasmus, Rasmus Ristolainen, and you got a really good and young top pairing. If Zach Bogosian and Jake McCabe stay healthy, then there\’s two more quality defenseman.

Goalies: Robin Lehner is gone, Carter Hutton is in, and is a big upgrade, if he can put up a season similar to 2017-18 in his first full time starting gig. They are trusting Linus Ullmark to be a full time backup, and I think he can do it.