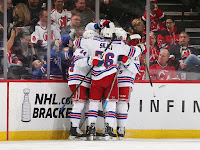 Having a top farm system in the NHL is always a good thing. Having a top farm system, then getting the 2nd overall pick, then signing the top free agent available is an even better thing. The Rangers might not even be a playoff team, but they had an amazing offseason, signing Artemi Panarin and drafting Kaapo Kakko. They even traded for a top defenseman on top of that.

Forwards
In his four year NHL career, Panarin has always been a very valuable asset. He won the Calder Trophy in 2015-16, he has scored no less than 74 points in a season, and scored 28 goals with a career high 87 points last year, setting the record for most points by a Blue Jacket in a single season. He signed with the Rangers on a seven year deal worth over $12.6 million a season. Panarin will share the top line with center Mika Zibanejad, whose 30 goals and 74 points in 2018-19 were career highs. He also led the team in both categories. Chris Kreider could be entering his final season with the Rangers. A free agent at the end of the year, Kreider scored 28 goals with 52 points in 2018-19. Kakko comes from the Finnish league, where as a 17 year old, he scored 22 goals in 45 games. He scored six goals in 10 games at the World Championships. He could be on the top line with Panarin and Zibanejad. The team signed Pavel Buchnevich to a two year deal after he scored a career high 21 goals. After being acquired from Edmonton for Ryan Spooner (who was later bought out), Ryan Strome scored 18 goals with 33 points in 63 games. His 19 goals overall were a career high, and his 35 points were his most since 2014-15. Vladislav Namestnikov is entering a contract season. He had a down year, with 11 goals and 31 points, and it seems like a 2017-18 midseason trade from Tampa has hurt him. At 19, Filip Chytil scored 11 goals, but he was a -22 player. Jesper Fast, another forward entering a contract year, had a rough 2018-19, with eight goals and 20 points. Brett Howden, a 2016 first rounder, had 23 points in a 66 game rookie season. Lias Andersson, drafted 7th overall in 2017, had just six points in 42 NHL games, and 20 points in 34 AHL games. Brendan Lemieux is an RFA, and is coming off a 12 goal rookie season. Three of those goals were scored in his 19 games with the Rangers. Greg McKegg was signed as an extra forward after a career high six goals and 11 points in 41 games for Carolina. Cristoval \”Boo\” Nieves has been a depth forward for a couple of years now. He had 10 points in 43 games last year.

Defensemen
Jacob Trouba is the new top defenseman after being acquired from Winnipeg. He signed a seven year, $56 million deal as well. He scored a career high 50 points, led by his 42 assists. Currently an RFA, the Rangers might not have the cap space to sign Tony DeAngelo. His 30 points in 61 games last year led Rangers defensemen. Brady Skjei had 25 points for a second consecutive season, and scored a career high eight goals. Marc Staal has fallen as he has aged. He had 13 points and a career worst -9 rating last year. The Rangers acquired prospect Adam Fox from Carolina. At Harvard, Fox had 48 points in 33 games. Libor Hajek made his NHL debut last year, with a goal in five games. He had just five points in 58 games in the AHL. Brendan Smith has had a rough stint in New York. He had 13 points in 63 games with a -7 rating, and despite the fact he is getting paid over $4 million, he may not start.

Goalies
Henrik Lundqvist will be in the Hall of Fame when he retires, as the former Vezina winner has had an amazing career. But, he had a rough 2018-19, with a .907 SV% and 3.07 GAA. For now, he is still the starter. Alex Georgiev had a decent rookie season, with a .914 SV%. He remains as the backup.

Deep Depths
Matt Beleskey\’s $1.9 million cap hit will go away after the season. Over the last two seasons, he has one goal in five games for the Rangers. He had five goals with 22 points in 53 games this past AHL season. Vinni Littieri had three points in 27 NHL games, but he scored 23 goals in 48 AHL games. Philip Di Giuseppe signed a two way deal. In 150 career NHL games, he has 41 points.

Up and Coming
Besides Kakko, Andersson, Howden, Chytil, Hajek and Fox, the Rangers have more young talent. 2018 first rounder Vitali Kravtsov could be NHL ready after scoring 21 points in 50 KHL games. Potentially Lundqvist\’s future replacement, Igor Shesterkin posted otherworldly numbers in the KHL. He had a 1.11 GAA and a .953 SV%.

Management
David Quinn returns for his second season as Head Coach. It was a tough first year, but now his roster is better. With both Boston and the Rangers, Jeff Gorton has an amazing resume as a GM. A goalie with the Rangers in the late 70s, John Davidson returns, this time as team President.

Prediction
The Rangers are one of the most improved teams in the NHL. But, the Eastern Conference is looking very tough this year, and it doesn\’t look like the Rangers have a spot in the playoffs. I predict they\’ll finish in 6th place in the Metropolitan Division.