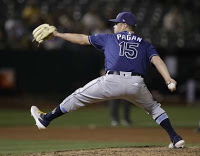 The San Diego Padres have acquired RHP Emilio Pagan from the Tampa Bay Rays in exchange for OF Manuel Margot and C/OF Logan Driscoll.

Pagan debuted as a 26 year old with Seattle in 2017. He was traded to Oakland for Ryon Healy in 2018, and then to Tampa Bay a year later in a three team deal netting Oakland Jurickson Profar. When he debuts for San Diego, he will have played for his 4th team in four career seasons, and his teammate will be Profar, who the Padres acquired from the A\’s earlier this offseason. Pagan\’s best season came in 2019. He rose to the closer role in Tampa Bay, earning his first career save early and finished in a tie for 21st in the league in saves by the season\’s conclusion. Pagan will see a big dip in saves however, as the MLB\’s leader in 2019 was San Diego\’s own Kirby Yates with 41. The Padres had a 4.52 bullpen ERA in 2019, finishing 19th in the majors. With a 3.66 ERA, the Rays edged out Cleveland to lead the league. Trading their closer will definitely hurt, but the Rays are very at finding diamonds in the rough and their pen should be fine. The Padres have upgraded their bullpen this offseason, signing Drew Pomeranz, bringing back Craig Stammen and trading for Pagan. They lose Margot, a speedy outfielder with a great glove but a weak bat. The Rays could platoon Margot and Kevin Kiermaier, a left handed bat with the same skills. With Kiermaier in center, Margot in right and former Padre Hunter Renfroe in left, the Rays will have a very good defensive outfield. Austin Meadows and new acquisition Randy Arozarena also will see outfield time. Meadows will likely see more right field time than Margot, but the Rays did DH Meadows often last season. For the Padres, Tommy Pham (who was acquired from the Rays for Renfroe this offseason), Wil Myers and new acquisition Trent Grisham will likely make up their outfield for most of the season. Franchy Cordero and Josh Naylor are options as well. Driscoll was San Diego\’s 2nd round pick in 2019 out of George Mason University. He will not be a top 30 prospect in the Rays system, per MLB Pipeline.