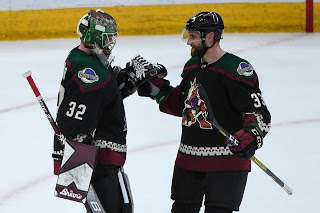 There was a point in time where everything seemed alright for the Coyotes. Even after the resignation of John Chayka, the team beat the Predators in the wild card round. Then, everything fell off. The Avalanche dismantled them, and with the highest cap hit in the league, the team was unable to bring back Taylor Hall, and then the Mitchell Miller saga started. It was an offseason of embarrassments in Arizona, but after being placed in a weak division, their playoff odds still stand strong.

One Move I\’d Make: Try to unload Oliver Ekman-Larsson-Larsson to Boston or Vancouver if there is still a chance.

Forwards: Before he left, Hall had success with Conor Garland and Christian Dvorak. Those two will stay together with Nick Schmaltz as a good candidate to be their linemate. The Coyotes might have hit with Garland, a 5th rounder in 2015. He scored 22 goals for them in 68 games. In his three full seasons, Dvorak is yet to hit 40 points, but his 38 in 70 games this past season was a career high. He also had a career best 51.3 CF%. In his first full season in the desert, Schmaltz led the team with 34 assists and 45 points. Both him and Garland could benefit from each other, with Schmaltz as the playmaker and Garland as a goal scorer. The Coyotes have a very expensive top line, carrying a cap hit over $20 million combined. Since finishing third in Calder voting as a 19 year old, Clayton Keller is yet to come close to the 65 points he had in 2017-18. His goals per game and points per game did improve from a weak 2018-19. Despite a good first year, Derek Stepan has not worked out in Arizona. Stepan had a career low 35 points in 2018-19, but topped that off in 2019-20. He scored a career low 10 goals, and his 18 assists were also a low. This includes the 48 game 2012-13 year. For a playmaker like Stepan, adding a six-time 30 goal scorer like Phil Kessel should have helped him, but Kessel also posted bad numbers. His 38 points was his least since 2007-08, and his 14 goals have only been worse in 2006-07. Even though he is now 33, there is still hope as Kessel is just one year removed from an 82 point season, albeit that was with Evgeni Malkin on his line. 2018 5th overall pick Barrett Hayton debuted in 2020, and was quiet, only posting four points in 20 games. He has been playing in Finland over the break, but he hasn\’t scored in 8 games. The Coyotes are banking on Hayton to be their third line center, which would create a playmaker-heavy center core. While he will not live up to the hype that had him drafted ahead of Mat Barzal, Thomas Chabot, Kyle Connor, Brock Boeser, Travis Konecny and more in 2015, Lawson Crouse has developed into a nice third liner for the Coyotes. Standing six feet and four inches tall, Crouse is a physical threat who scored a career high 15 goals in 66 games last season. An early second round pick in 2015, Christian Fischer has fallen off after a 15 goal rookie season. In 56 games in 2019-20, Fischer scored just six goals with three assists. A line of Crouse, Hayton and Fischer feels like a big boom-or-bust opportunity, and none of them are older than 23. The Coyotes revamped their fourth line and improved their penalty kill by signing Tyler Pitlick and Johan Larsson. A defensive first center, Larsson averaged two minutes a game on the penalty kill for the Sabres, while Pitlick averaged a minute and two second for Philadelphia. Pitlick is the better offensive player, and scored 10 goals for the Flyers last year if you combine playoff and regular season stats. John Hayden and Dryden Hunt are fighting for the final spot. Hayden has defensive defenseman-like stats, with 11 goals and 26 points in 156 career games. Hunt has 15 in 63 games. They could split games.

The Coyotes might regret not trading Oliver Ekman-Larsson when they had the chance. Ekman-Larsson\’s contract looks really bad, and they could have gotten really good value for him. His production has seen a decline recently. His 30 points were his least in a season (minimum 50 games) and it was also the first time he didn\’t score 10 goals or more (also minimum 50 games). Besides Ekman-Larsson, Jakob Chychrun is the only defenseman who isn\’t a UFA after 2020-21. Chychrun reached a career high 12 goals and 26 points, although he has not played in 70 games in a season, and that won\’t change in 2020-21. Jason Demers has averaged at least 20 minutes of ice time a game in three seasons with the Coyotes. In his prime, Demers consistently had a CF% over 50, although that hit a career low 46.6 mark last year. With 32 points, Alex Goligoski led Coyotes defenders. He has hit at least 30 points in nine of the last 11 seasons. Longtime shutdown defenseman Niklas Hjalmarsson played in just 27 games, thanks to an injury sustained after blocking a shot. His .19 points per game was actually his highest as a Coyote. Both Jordan Oesterle and Ilya Lyubuskin will spend time on the third pairing. Lybushkin is the only right-handed defenseman on the team besides Demers, and he has only eight points in 92 career games. Oesterle has 33 points in two seasons with Arizona.

The strong point of this team is goaltending, with two good goalies both on good, but short-term deals. Darcy Kuemper has been great the last two seasons, and he had career bests in both SV% (.928) and GAA (2.22), but in just 29 games last year. He had a 16.65 GSAA. It will be tough for the Coyotes to bring back Antti Raanta, who is a free agent after this season. He has a .924 SV% in three seasons for them.

The Coyotes are pretty mediocre, and in other divisions they should not be as close to the playoffs as they are. But, to get there, they\’ll have to beat out the definition of mediocrity in hockey in the Minnesota Wild. With elite goaltending, a young forward core and a lot of defensive defenseman, the Coyotes have a 50/50 chance. I say they make it.