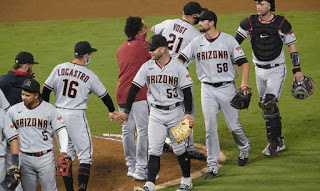 When you don\’t go big, success rarely holds up. That should become the new motto for the Diamondbacks, who have officially missed their window of success with Zack Greinke, Paul Goldschmidt, Robbie Ray and Archie Bradley walking out the door in recent years. Of course, the Dodgers are still a massive threat in the NL West, but the Padres are going all-in, something the Diamondbacks conservatively tried to do, and that makes it impossible for the other three NL West teams to succeed. While 2020\’s 5th place finish was a little bit undeserved for Arizona, the division rival Rockies did their best to change that by trading Nolan Arenado. With the pressure off of them, GM Mike Hazen and Manager Torey Lovullo have the opportunity to build up a new, younger core.

After trading away ace Zack Greinke in 2019, the Dbacks went aggressive, and pried Madison Bumgarner from the rival Giants, after he posted a career worst 3.90 ERA in 2019. Bumgarner, who is somehow only 31, got absolutely crushed in his first year in the desert. In nine starts, he struck out just 30 batters in 41.2 innings, with a 6.48 ERA. He allowed barrels nearly 15 percent of the time, with an expected slugging against of .613. His fastball velocity also plummeted to an average of 88.4 mph. The team did find a replacement for Greinke however, in 25 year old Zac Gallen. He throws a curveball that had a 38.4 whiff rate and a .098 average against last year. Gallen had a 2.75 ERA and 10.3 K/9 over 12 starts. Injuries limited Luke Weaver to 12 starts in 2019, and he succeeded with a 2.94 ERA. However, the shortened season limited him to that exact same amount of starts in 2020, and the results changed drastically. Weaver finished with an ERA of 6.58, accompanied with a 9.5 K/9 and a hard hit percentage of 42%. The Diamondbacks used a hot start by Starling Marte to flip him to Miami for lefty Caleb Smith, who showed the ability to strike out batters and put exceptional spin on his fastball in Miami. In four games (three starts) after the trade, Smith had a 2.45 ERA with 12 strikeouts in 11 innings. Merrill Kelly failed to show his KBO success in 2019, when his 4.42 ERA in 32 starts made him questionable for the rotation in 2020. While he made just five starts last year, he pitched well, with a 2.59 ERA and a 0.989 WHIP. With a 4.0% BB rate, Kelly placed in the top five percent of pitchers. Lefty Alex Young spent a lot of time in the \’pen last year, but he can be stretched out to be a spot starter. Young posted a 5.44 ERA with a .545 xSLG in 2020.

Sinkerballer Stefan Crichton became the team\’s closer after Archie Bradley was dealt to Cincinnati, and converted five saves. He had a 2.42 ERA with 23 strikeouts in 26 innings. Plus, he limited barrels to just 1.4%, and his curveball had a 44.6% whiff rate. The only competition for the closing job right now is veteran Joakim Soria, who comes in after closing for the Royals, Tigers, Rangers and White Sox in previous seasons. Soria spent 2019 and 2020 in Oakland, and last year he had a 2.82 ERA with 24 strikeouts in 22.1 innings. His peripherals were great, as Soria finished with a 2.76 xERA and a .243 wOBA against. Yoan Lopez had a 3.41 ERA in 2019, but the warning signs were massive. He had a .312 xBA and a 6.60 xERA. Those awful numbers improved last year, although his standard numbers didn\’t. Lopez had a 5.95 ERA with a .227 xBA, a 90.5 average exit velocity and a 4.39 xERA. 2016 24th round pick Riley Smith had an encouraging rookie season. He appeared in just six games, but he threw 18.1 innings, with a 1.47 ERA and 18 strikeouts. His sinker being thrown predominantly led to a 48.9% groundball rate. Former Reds farmhand Keury Mella probably earned a roster spot in 10 innings last year, with a 1.80 ERA and 10 strikeouts. He throws a mid-to-high-90s fastball and sinker, plus a slider that contributed to 80% of his Ks last year. The lefty in the bullpen (besides Alex Young) will come down to Travis Bergen and Ryan Buchter. Bergen was acquired for Robbie Ray at the deadline, and he struck out eight batters in seven appearances afterwards. However, he also walked eight batters, with a 4.05 ERA. Buchter is a 34 year old veteran who has a career ERA of 2.90. 2020 was actually his first season with an ERA over 3.00, as he posted a 4.50 mark in six innings with eight strikeouts for the Angels. Buchter has limited lefties to a .620 OPS in his career. The final spots will go to two of a trio of right-handers, two of which came from the Yankees organization. Ben Heller recently signed a minor league deal with the team. Injuries and a high walk rate prohibited him from becoming a regular in New York, but he has a 2.59 ERA in 31.1 career innings with 30 strikeouts. Taylor Widener debuted in 2020, striking out 22 but also walking 12 in 20 innings. The most experienced of the group is Taylor Clarke, a long relief and starter option who probably isn\’t needed if the team carries six starters plus Smith. Clarke had a 4.36 ERA with 40 strikeouts in 43.1 innings last season. Chris Devenski, in camp on a minor league deal, could make the team. He allowed six runs in 3.2 innings last year, and is not the same player he once was in Houston.

Carson Kelly regressed after a career 2019 season. His OPS+ dropped 40 points, down to 71. Kelly hit five home runs with a big decrease in his walk rate, down to 4.7 from 13.2% in 2019. Veteran Stephen Vogt also hit well in 2019 before a huge drop-off in 2020. Vogt finished with a .167 average and a .525 OPS, as his average exit velocity dropped by 2.5 mph. Still, Vogt is a great pitch framer. Daulton Varsho is one of the top catching prospects in baseball, but he played center field more than he caught last year. Varsho hit three home runs, stole three bases and had a .653 OPS in 37 games last year. Varsho had an .899 OPS in AA in 2019. He has a solid chance to be the starting center fielder in 2021.

Paul Goldschmidt\’s replacement, Christian Walker, continued to slug in 2020, as he finished with seven home runs, a .271 average and a 110 OPS+. Walker mashes the ball, with a 90.4 average exit velocity and a 48.5 hard hit percentage. After an MVP-level 2019 season, Ketel Marte regressed back to what he was prior to that. He hit just two home runs in 45 games, with a .287 average, and a very low 10.8 K%. One thing that he needs to improve on is a low 3.6 BB%. Nick Ahmed has become a slightly below average hitter, which is great for Arizona. Once an offensive liability, Ahmed had an acceptable 94 OPS+ in 2020. This is fine because Ahmed is a great defender, finishing with four outs above average last year, and 48 since the start of 2018. Like Marte, Eduardo Escobar regressed after a great 2019. Out went the 118 RBI pace, and in came a .605 OPS. Escobar did have a career high 88.5 average exit velocity and his K rate was under 20 percent, so I would not put too much stock into his rough 2020. Veteran Asdrubal Cabrera has reportedly signed a deal with the club, although nothing has officially been announced by the team at the moment. Cabrera hit eight home runs with a .753 OPS in 2020 for Washington. He was a key contributor in their 2019 World Series run, with 40 RBIs and a .969 OPS in 38 games down the stretch. He could move to second base while Marte plays center, but for now he should be a super utility player. 2017 7th overall pick Pavin Smith does not have the pedigree of Keston Hiura or Jo Adell, two players picked right after him, but he has a chance to make the roster. The lefty debuted in 2020, and he can play first base and left field. Smith hit .270 with a 99 OPS+ in 12 games, and he had an .835 OPS in 2019, down in AA. A 2012 2nd rounder by the Pirates, Wyatt Mathisen has a small chance of making the roster. He played in nine MLB games in 2020, and in 2019, Mathisen hit 23 home runs with a 1.004 OPS at AAA.

Entering his eighth season, David Peralta was still productive in 2020. Peralta hit five home runs with a .300 average and a .773 OPS, while playing above average defense. Right fielder Kole Calhoun was actually the most productive offseason pick-up from last year. After hitting 33 home runs for the Angels, Calhoun brought his power bat to Arizona, where he hit 16 home runs with an .864 OPS in 54 games. His .519 xSLG was well above-average. Center field is where things can get messy. Varsho and Marte will both likely get reps there, and Varsho could be the primary CF. Speedster Tim Locastro is also an option. He is 26-for-26 in stolen base attempts in his career, with four of them coming last year. He is a great defender, and 30.7 ft/s sprint speed led the majors in 2020. Locastro is not known as a good hitter, but he hit .290 with an .859 OPS in 33 games last year. If either Varsho or P. Smith (there are three Smiths on this team!) start in the minors, then Josh Rojas will start on the roster. Since coming over in 2019 in the Greinke deal, Rojas has played both corner outfield positions, plus second base and shortstop in 58 games for the D-backs. Rojas only has a .567 OPS in those games though.

The Diamondbacks are caught in an odd position. Maybe they could finish second or third in the NL Central or AL West, but they aren\’t close to competitiveness in the NL West. The Dodgers and Padres will dominate the division for years to come, while the Diamondbacks have a shot at third place at best. That is where I see them finishing in 2021.