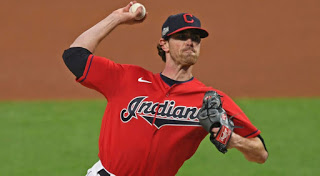 Spare change? Paul Dolan could use it. The owner of Cleveland has an estimated net worth of $4.6 billion, but for now he is more interested in pinching pennies. The Indians have been cheap in years prior, but the past year has really cemented that. At the trade deadline, they sold off Mike Clevinger, despite being in a prime playoff position. In the offseason, they released Brad Hand instead of picking up an option that ended up being less than what he was worth, and then, traded star shortstop Francisco Lindor and fan favorite Carlos Carrasco to the Mets without getting much in return. Yikes. Enjoy Shane Bieber while you have him, Clevelanders.

It\’s amazing how after losing Clevinger and Carrasco, plus Trevor Bauer and Corey Kluber in recent seasons, the Indians still have an amazing rotation. It all starts with Shane Bieber, who won the AL Cy Young and finished 4th in MVP voting, and maybe he should have won. Bieber led the league in just about every major stat, with a 1.63 ERA, 122 strikeouts, a 5.4 H/9 and a 281 ERA+. You could write it off as a small sample size, and a weak AL and NL Central Division, but the White Sox and Twins, two teams that accounted for a third of Bieber\’s starts, both have elite offenses. He is just 25 years old, something most people don\’t realize. Zach Plesac had a great season, but breaking COVID protocols led to him being sent to the alternate training site for nearly a month. In the eight starts that he did make, Plesac struck out 57 in 55.1 innings with a 2.28 ERA, a 2.9 BB% and a .237 wOBA against. At age 26, Plesac will likely be the oldest starter in the rotation. Aaron Civale was the one Indians pitcher to struggle last year, as he allowed a league most 82 hits in 74 innings. He had a 4.39 xERA with a low 5.1 BB% and an average exit velocity of 87.1 mph. Civale was really good a 10 game 2019 stint, finishing with a 2.34 ERA in 57.2 innings. MLB Pipeline\’s 51st best prospect in baseball is Triston McKenzie, a 23 year old who stands six feet tall and five inches, but only 165 pounds. He debuted to encouraging results in 2020, striking out 42 in 33.1 innings with a 3.24 ERA. Batters were limited to a .205 xBA with an 86 mph average exit velocity. The one concern with him is a 12% barrel percentage, but you could draw that up to just 75 batted balls against. The fifth starter spot is an open competition, mainly between two former Padres prospects acquired in blockbuster trades. Cal Quantrill came over from San Diego midseason in the Clevinger trade, and he made two starts at the end of the season after moving to the bullpen. Between the two teams and two positions, Quantrill was constantly effective, finishing with a 2.25 ERA in 32 innings. In the Cleveland half of that, he had a 1.84 ERA with 13 strikeouts in 14.2 innings. Even though he has more experience, I could see Quantrill starting in the bullpen, while Logan Allen starts. Allen, who came over in 2019\’s Trevor Bauer trade, would be the rotation\’s lefty, and he allowed four runs in 10.2 innings for a 3.38 ERA in 2020. He struck out seven batters but unfortunately he also walked seven batters. He throws a changeup with a spin rate under 1200 rpm that has been effective in his short MLB time.

Brad Hand is now a National, leaving the closer role open. The obvious filler would be strikeout specialist James Karinchak, who is good at almost everything pitching-wise. Karinchak struck out 53 batters in 27 innings, one K away from averaging two per inning. He had a 2.67 ERA with a .130 xBA, a .196 xSLG, and a 2.22 xERA, which are all amazing numbers. Karinchak throws a fastball and a curveball almost equally, and they are both wipeout pitches. The reason I said he was good at almost everything is because of his walk rate, which was in the bottom five percent of the league in 2020, at 14.7%. Nick Wittgren generally has a good ERA, but his high HR/9 inflates his xERA. Wittgren had a 3.42 ERA but a 4.74 xERA in 2020. He struck out 28 batters in 23.2 innings, and both his fastball and changeup were effective pitches. Entering his 19th MLB season is Oliver Perez, who got a minor league deal despite a productive three years in Cleveland. He had a 2.00 ERA in 18 innings, and righties had a .627 OPS against him, and lefties had a .480 OPS versus him. The Indians acquired Emmanuel Clase last offseason for Corey Kluber,   but he missed the 2020 season serving a PED suspension. Clase throws a sinker that averaged 99.2 mph in 2019, plus a low-90s slider. In 2019 for the Rangers, he had a 2.31 ERA with 21 strikeouts in 23.1 innings.   Righty Phil Maton has high spin rates on all of his pitches, and he limited batters to an 82.7 mph average exit velocity. He struck out 32 batters in 21.2 innings with a 2.81 xERA. Rookie Cam Hill had a 4.91 ERA in 18.1 innings, but he did have a 0.873 WHIP. Batters hit .100 against Hill\’s slider with a 43.2% whiff rate. The final spot will likely come down to Adam Plutko, Bryan Shaw and lefty Kyle Nelson. Plutko gives them length in the pen. He had a 4.88 ERA in 27.2 innings, and only struck out 15 batters. Shaw used to be a workhorse for Cleveland, leading the league in appearances in 2014, 2016 and 2017. He spent 2018-2020 with the Rockies, where the heavy load and Coors Field took a toll on him. His average exit velocity went up by five mph in Colorado. Nelson struck out 69 batters in 47.1 innings with a 2.28 ERA in the minors in 2019. He debuted in 2020, but it wasn\’t pretty, allowing four runs in 0.2 innings.

Roberto Perez won his second consecutive Gold Glove, but all of his offensive progress was lost. After hitting 24 home runs with a .774 OPS, Perez hit just .165 with a .480 OPS in 32 games. His average exit velocity dropped by 4.2 mph, down to 86. He walked 10 percent of the time, but struck out 34.5% as well. The team kept Austin Hedges after acquiring him in the Clevinger deal. Hedges has Perez\’s defensive abilities, just with even less offensive production. Hedges hit .145 with a .521 OPS in 2020, and he has a career xSLG of just .342.

They may not have Francisco Lindor anymore, but at least Jose Ramirez is still in Cleveland. Ramirez won the Silver Slugger at third base, and finished 2nd in MVP voting to Chicago\’s Jose Abreu. Ramirez hit 17 home runs with 10 stolen bases, a .292 average and a .993 OPS. He walked 12.2% of the time, and struck out just 16.9% of the time, which was actually his highest since 2015. Bobby Bradley was once a top prospect, but he has fallen in the system as the Indians held him in the minors. He debuted in 2019, but spent 2020 at the alternate training site. In 107 AAA games in 2019, Bradley hit 33 home runs with a .912 OPS. After winning the AL Gold Glove at second base, the Tribe brought back Cesar Hernandez. Hernandez hit a league leading 20 doubles with a .283 average and a .763 OPS. He had four outs above average with a 28.5 ft/s sprint speed. In exchange for Lindor, the Indians got two starting caliber shortstops from the Mets. The likely starter is Andres Gimenez, the speed and defense specialist who was once New York\’s top prospect. In his rookie season, Gimenez hit three home runs with eight stolen bases and a .732 OPS. Playing second, third and shortstop, he had a combined five outs above average. The other former Met is Amed Rosario, who is basically Gimenez but a few years older. Rosario is generally a bad defender, but he did have two outs above average last year. He hit .252 with a .643 OPS and a very low 2.7 BB%. Rosario is very fast, but went 0-for-1 in stolen base attempts in 2020. Lefty power bat Jake Bauers can play corner outfield, and compete with Bradley at first base. Bauers hit 12 home runs with a .683 OPS in 2019, but didn\’t play in 2020. Bauers has a 12.2 BB% in his two year career, but also a 27 K%. He is also less than a year older than Bradley.

Outfield has been a problem for the Indians over the past few years, so they signed Eddie Rosario to play left field. Rosario has great power, as he hit 32 home runs in 2019, and he can hit for average. However, his very low walk rate has stunted his OPS considerably, as his career high is .836. Rosario hit 13 home runs in 2020 with a .792 OPS and a 14.7% K rate. His 8.2 BB% was easily a career high, so at least there is progress there. 23 year old Josh Naylor came over from San Diego, and while he only had a .556 OPS in 22 games after the trade, he showed what he could be in the two game playoff series versus the Yankees. He went 5-for-7 with a home run and three doubles in those games. In center field is still Oscar Mercado, but Rosario or former first rounder Bradley Zimmer could say otherwise. Mercado hit 15 home runs with 15 stolen bases as a rookie in 2019, then promptly became baseball\’s worst hitter. In 36 games, Mercado hit .128 with a .348 OPS and a 29 K%. A silver lining is that his exit velocity and hard hit percentage wasn\’t really affected. Corner outfielder Jordan Luplow saw his barrel percentage and hard hit percentage nearly get cut in half in the shortened season. After posting a .923 OPS in 85 games in 2019, Luplow finished with a .663 OPS in 29 games. He does walk a lot, 13% of the time in fact. Slugger Franmil Reyes won\’t play in the field often; he totaled five innings in 2020. But, he is a full-time DH with an above average OPS+ in all three of his seasons. Reyes hit nine home runs with a .795 OPS. He crushes the ball, with an average exit velocity of 92.4 mph. Unfortunately, he also struck out at a 28.6% rate.

The rotation is still great, and it\’s even younger. The bullpen has some good pitchers, but it lessens out at the end. But, the Indians still don\’t have a deep lineup; they didn\’t when they went to the World Series in 2016. With the Twins and White Sox have more all-around teams, the Indians don\’t have a place. They will finish in third place, and it won\’t be close. Sadly, there will be no playoffs in Cleveland.