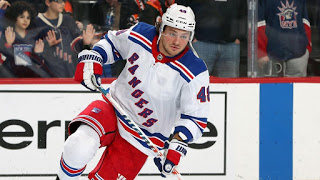 The Los Angeles Kings have acquired forward Brendan Lemieux from the New York Rangers in exchange for a 2021 4th round draft pick.

The son of former instigator Claude Lemieux, the younger Lemieux plays like his father did. While Claude scored 41 goals in one season, Brendan is not a goal scorer. He is a fourth line player who has gotten some power play time, but really should not play on special teams. He can fight, and be a physical presence on Los Angeles\’ fourth line. The price of a 4th round pick is not much, especially when Lemieux is under contract through 2021-22, with a $1.55 million cap hit. Even when that expires, Lemieux will be a restricted free agent. At the time of the trade, Lemieux\’s 59 penalty minutes lead the NHL, six above Trent Frederic, who has become quite acquainted with Lemieux this year.

The Rangers are not completely out of the playoff picture, but that does not mean that selling off a player makes no sense. The Rangers have a lot of skaters, especially with Phillip Di Giuseppe and Brett Howden returning from injury. Also, Vitali Kravtsov is returning to North America soon. Lemieux is not great on offense or defense, and he is very expendable. They also can clear a little bit of cap space for next year.

Lemieux, 25, has scored two goals with five assists for seven points in 30 games this year, with 61 hits. In his NHL career for the Rangers and Winnipeg Jets, Lemieux has scored 21 goals with 22 assists in 43 points, plus 366 hits in 161 games.