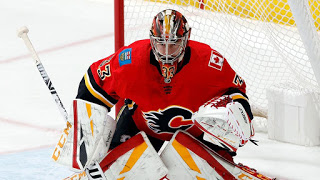 The Toronto Maple Leafs have acquired goaltender David Rittich from the Calgary Flames in exchange for a 2022 3rd round draft pick.

The Maple Leafs have been without goalie Frederik Andersen due to injury, but replacement Jack Campbell has been amazing, with a .934 save percentage and an 11-0-0 record. This trade is merely insurance in case Andersen misses even more time, as Rittich is a backup goaltender at best. He also does not have to quarantine entering Canada, as he already plays for a Canadian team. Trading a third round pick is a big price for a guy who will hopefully be a third goalie in the playoffs, unless Toronto plans on moving away from Andersen, which would be weird to see. The Flames retained half of Rittich\’s salary, so Toronto only takes on $1.375 million.

The 17-21-3 Flames are six points out of the playoffs, and sellers at this year\’s trade deadline. The team should be getting as many assets as they can for their pending free agents, and Rittich was one of them. A third round pick is good value for a backup goaltender. They get a bit more thanks to their ability to retain half of Rittich\’s salary.