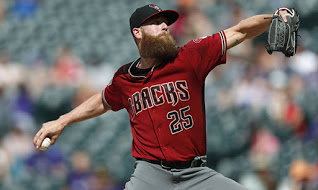 The Cincinnati Reds have acquired RHP Archie Bradley from the Arizona Diamondbacks in exchange for IF Josh VanMeter and OF Stuart Fairchild.

Bradley has been a good late inning reliever over the years for the Diamondbacks. The 7th overall pick in 2011 became their closer when Greg Holland was released last year. Bradley will be a much needed addition to a struggling Reds bullpen. While he hasn\’t had an amazing start to the season, Bradley still has one more year left of control, so I am surprised he got this low of a return. VanMeter is young with some MLB experience, but he has had an awful start to this season. A 2017 2nd rounder, Fairchild was Cincinnati\’s 11th best prospect (per MLB Pipeline) prior to the deal. He reached AA last year, and had good numbers.