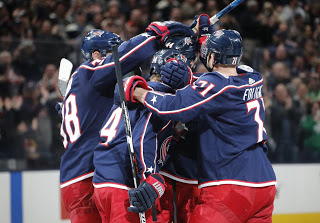 After the Islanders lost John Tavares and made the playoffs in 2018-19, the Blue Jackets did something even more impressive. They lost Artemi Panarin, Sergei Bobrovsky, Matt Duchene and Ryan Dzingel, and then made the playoffs. The Blue Jackets might follow the Isles and make the Conference Finals now, and they probably could. They play a defensive game, and they have a very talented forward group. Unfortunately, they still have a key RFA to sign, with a ton of pending UFAs.

Best Move: Traded Josh Anderson to Montreal for Max Domi and a 3rd round pick.

Worst Move: Trading away Ryan Murray for a 5th round pick.

The one remaining goal for the Blue Jackets this offseason is to extend Pierre-Luc Dubois, preferably long-term, as Cam Atkinson is the only player on the team signed past 2022-23. The 22 year old scored 18 goals and led the team with 49 points in 70 games. He also led the team with 10 points in the playoffs. Dubois had a lot of success with Oliver Bjorkstrand and Alex Texier. Bjorkstrand scored a team leading 21 goals, and he only played in 49 games. He only took 12 penalty minutes, which was actually a career high. Texier is 21 and only played in 36 games last year, scoring six goals with seven assists. He had four assists in the playoffs. While playing with Dubois, Texier averaged nearly 22 minutes a game in the postseason, although their 5OT loss versus Tampa Bay probably inflates that. The Blue Jackets had a lot of injuries last year, and Cam Atkinson was part of the injured group. He scored 12 goals with 14 assists in 44 games, for a .27 goals per game, his lowest since 2013-14. That\’s still a 22 goal pace, and he has hit at least 20 in the six seasons prior to 2019-20. Columbus made a nice deal getting Max Domi from Montreal. Just one year removed from a 72 point season, Domi can play center and wing, and he scored 17 goals with 44 points in 71 games last year. He is a big improvement at second line center. Gustav Nyquist came to Columbus on a four year deal that I didn\’t think would work out, but it has so far. Nyquist scored 15 goals with 42 points in 70 games. Captain Nick Foligno could be entering his final season in Columbus. He\’s put up third line production in his last three seasons, maxing out at 17 goals and 35 points in this span. Foligno is coming off of the weakest of these three years, with 10 goals and 31 points in 67 games. He did score six points in 10 playoff games, his most of his eight career playoff runs. Boone Jenner scored 11 goals with 24 points, his lowest since his 2014-15 season, where he only played in 31 games. He also had a low 46.7 CF%. Jenner can play the wing, but he had a 55.2 face-off percentage last year. 2018 1st rounder Liam Foudy played in two regular season games, then became a regular in the postseason. He scored his first career goal and had an assist in 10 games. The Blue Jackets signed Mikko Koivu, who played his first 15 seasons in Minnesota. Koivu played in 55 games last year, and had a career low 21 points. Koivu consistently received Selke votes in his prime, and he is still a defensive forward, making him a good fourth line center for the Blue Jackets. The two wingers for Koivu come down to Mikhail Grigorenko, Riley Nash and Emil Bemstrom, with Eric Robinson and Kevin Stenlund having an outside chance. Grigorenko had 64 points in 217 games from 2012-13 to 2016-17 with the Sabres and Avalanche before leaving for the KHL. Last year, Grigorenko scored 19 goals with 22 assists for 41 points in 47 games. Bemstrom debuted last year, and the Swedish 21 year old scored 10 goals with 10 assists in 56 games, which isn\’t bad for a rookie season. Riley Nash had 14 points in 64 games, cementing himself as the second greatest Nash in Blue Jackets history. He\’s a solid defensive forward but he had an ugly 45.3 CF% last year. Robinson has amazing speed, but hasn\’t put that to use in the NHL, with 12 points in 50 games. Stenlund played in 32 games, and he scored six times with four assists. The final depth option is the five-foot-four Nathan Gerbe, who played in 30 games, finishing with 10 points.

Explaining Seth Jones would be pretty confusing for a casual NHL fan. He\’s received Norris votes in each of the past four seasons, and has offensive value, with at least 30 points in the past five seasons, including in 56 games this past season. He plays a lot of hockey, averaging over 25 minutes on ice a night during the regular season, and over 32 minutes in the playoffs. But, despite this, his analytics are good, but nothing special that would say that he\’s a top-five defenseman. He had a good 4.5 Goals Above Replacement last year, and Evolving-Hockey estimated his worth at just $3.4 million last year. Good, but nothing special. His partner, Zach Werenski, is valued much higher by analytics, mostly because of his offensive value. He nearly led Columbus with 20 goals last year and he added 21 assists in 63 games. Despite a career low amount of games, that was a career high goal total for him. In each of his four seasons, Werenski has gained Byng votes. David Savard has earned the reputation of a second pairing, shutdown defender. While he only had 11 points, all assists, in 68 games last year, Savard\’s GAR was 6.7. With Ryan Murray and Marcus Nutivaara gone, Vladislav Gavrikov now has a much bigger load on the left side. He paired well with Savard last year, and earned a nice three year extension in the offseason. The 25 year old posted 18 points in a 69 game rookie season. Dean Kukan played in 33 games, which was actually a career high. The Switzerland native had five points, and became a regular in the playoffs, appearing in nine of the team\’s 10 games. Scott Harrington has played in 166 games for the Blue Jackets over the past four seasons. 39 of those game in 2019-20, where he had eight points. Former first rounder Gabriel Carlsson is almost 24, and has just 23 NHL games. In his six last year, Carlsson average ice time was ten minutes and 53 seconds.

Both Elvis Merzlikins and Joonas Korpisalo played in the playoffs, and were exceptional. Korpisalo set the all-time record for most saves in a game, and started nine games. In 37 regular season games, he had a .911 SV% with a 2.60 GAA. Merzlikins outplayed Korpisalo in his rookie season, finishing in 5th place in both Calder and Vezina voting. Merzlikins had a .923 SV% with a 2.35 GAA, and a 12.10 GSAA. They split time last year and probably will again this year, with Merzlikins being the 1A.

The Blue Jackets have a really good all-around team. They don\’t have one absolute star, even though Dubois, Jones and Werenski are all good. But, they have great depth and are led well by John Tortarella. Even with some tough teams in their new division, they\’ll beat up on Chicago and Detroit like every else, and just beat the Panthers for 4th place, and a playoff spot.