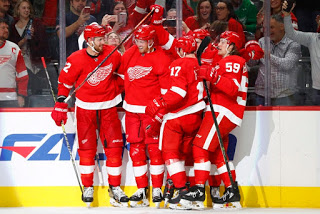 The Red Wings embarrassed themselves in 2019-20, finishing last place with a 17-49-5 record. Everyone, except for the rival Canadiens, destroyed Detroit. It got worse when they did not win the first, second or third overall pick in the draft lottery. Steve Yzerman is back in Detroit, and his presence was felt when the Red Wings went out and signed a bunch of quality players, and maybe even winning the offseason. The team is still far from being competitive, but the past few months did bring them closer.

Worst Move: Only giving Tyler Bertuzzi a one year extension.

One Move I\’d Make: Try to buy another draft pick by taking on a bad contract for one year.

After Anthony Mantha and Tyler Bertuzzi signed RFA deals, the Red Wings\’ top line is back. Mantha actually had the most productive season of the group, scoring 16 goals with 38 points in only 43 games. His 54.1 CF% looks godly compared to some of his teammates. The star of the line remains Dylan Larkin, the speedy center who played in all 71 games last year. He finished with 53 points, which was lower than his previous two seasons. Bertuzzi is the most physical of the three, and led the team with 21 goals. They all averaged over 18 minutes on ice a game, with Larkin reaching 21 minutes for the second consecutive season. The Wings made a nice trade early in the season, sending Jacob de La Rose to St. Louis for Robby Fabbri. Fabbri was a second liner for Detroit, and scored 15 goals, 14 of them with the Red Wings. The Red Wings don\’t have a lot of centers, so free agent signee Vladislav Namestnikov could move there. Namestnikov can play all three forward positions, and played for three different teams last year. Overall, he scored 17 times with 14 assists in 65 games. He scored four goals in 12 games for the Avalanche in the playoffs. It is becoming time for former 6th overall pick Filip Zadina to make a difference. Zadina played in 28 games last year, and scored eight goals with seven assists. He had a productive 3.4 GAR. The Red Wings signed Bobby Ryan, who was one of the best stories in hockey last year and won the Masterton for it. Battling back from addiction issues, Ryan scored a hat trick in his first game back. He had eight points in 24 games total, and is ready to produce for Detroit. Going from the Islanders to the Red Wings, Valtteri Filppula had one of the most dramatic +/- range from season to season imaginable. After a +19 season, Filppula returned to Detroit and was a -42 player. At least he wasn\’t the worst on the team, that goes to Andreas Athanasiou, who was traded at the deadline. Filppula\’s 21 points was his lowest since the shortened 2012-13 season. Darren Helm is back for his 14th, and maybe final season as a Red Wing. He still kills penalties for them, and scored nine goals in 68 games last year. The fourth line will be a revolving door of players, both young and old. Sam Gagner came over from Edmonton in February, and scored a goal in six games. He\’s had a few really nice seasons Corsi-wise recently. Another key penalty killer and longtime Wing, Michigan native Luke Glendening received a Selke vote despite a -29 rating last year. He does have some defensive value, although he contributes little offensively. The Frans Nielsen contract really didn\’t work out. He always was a solid two-way forward, and he did contribute in his first three seasons with the Wings before an awful nine point, 60 game 2019-20 campaign. He did actually receive a Lady Byng vote, taking only four penalties all seasons. The Red Wings game former rival Adam Erne a fourth line chance, and he had five points in 56 games. Two former first rounders, Michael Rasmussen and Evgeny Svechnikov, need to prove a lot of things this year. Rasmussen was a regular in 2018-19, but did not appear in the NHL last year. He scored seven goals in 35 AHL games. He is currently playing in Austria, and has 18 points in 18 games. Svechnikov played in four NHL games, and had 25 points in 51 AHL games.

The Red Wings hope that 23 year old Filip Hronek can be a first or second pairing defenseman for them. He averaged nearly 24 minutes of ice time a game last season, and had 31 points in 65 games. He\’s coming off of his ELC after this season and could earn a long term extension, depending on his play this year. His partner, Patrik Nemeth, was a productive defensive defenseman for the Wings last year, although he does not bring much offensive value. It\’s a stretch that he\’s a top pairing defenseman, but he can be a good addition for another team. Back surgery cost Danny DeKeyser just about his entire season. He had four assists in his eight games. Another Michigan native, DeKeyser had a 5.8 GAR in 2018-19. His partner will be Troy Stecher, who was a key part of the Canucks the past four seasons. Stecher had 17 points in 69 games last year, with a 48.7 CF%, higher than his team\’s average. The Wings brought in Jon Merrill, a third pairing defensive defenseman who averaged over 18 minutes a night for the dominant Golden Knights. Merrill had a 52.4 CF%, which would be amazing on the 2019-20 Red Wings, but was well below average for Vegas. The Red Wings essentially bought a second round pick by taking on Marc Staal\’s $5.7 million cap hit for this year. Staal really was not productive for the Rangers last year, with a 43.3 CF%. His main competition is Alex Biega, who played well for the Canucks in 2018-19 but regressed in Detroit, like just about everyone. He had three points in 49 games with a 45.1 CF%. Young defensemen Dennis Cholowski, Jared McIsaac and Moritz Seider will all develop elsewhere as the team goes with a veteran d-core this year.

A main problem last year was Jimmy Howard\’s 4.20 GAA. Obviously, he\’s gone, but in steps Thomas Greiss, who will see a big difference going from Barry Trotz\’ Islanders to this team. Splitting time with Semyon Varlamov, Greiss had a .913 SV% with a 2.77 GAA. He was great in four playoff appearances, with a .929 SV% and a 2.02 GAA. Jonathan Bernier is back, and while he was below-average last year, at least he was serviceable. Bernier had a .907 SV%, and he\’s made a nice career as a fringe-starter the past five seasons.

The 2017-18 Colorado Avalanche made the playoffs after the 2016-17 Avalanche had 48 points. Will the Red Wings follow their once rivals and surprise everyone in 2020-21? Probably not, the Avalanche had Nathan MacKinnon and Mikko Rantanen. It would be fun to dream, but the Wings are headed for another last place finish in 2020-21.